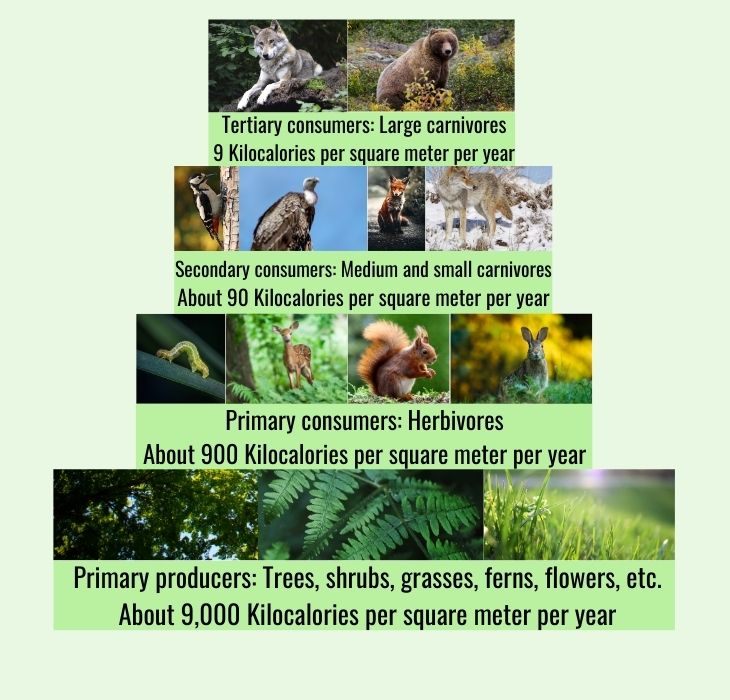 To understand the pyramids of biomass we first need to explain what is biomass, what is a food chain and what are trophic levels.

Biomass can be defined today as the organic materials produced by plants and animals such as wood, agricultural waste, energy crops, animal and human waste, etc.

The word ‘biomass’ consists of two words: ‘bio’ which means life, and ‘mass’ which refers to a large number of things.

Being produced continuously on the planet, biomass is considered a carbon-neutral source of renewable energy.

What is a Food Chain?

Food is a source of energy, and to get this energy, food depends on other sources of energy, organisms and plants.

In this case, the grass is the energy producer and obtains its energy from the Sun. All the other organisms eating each other are considered consumers (primary, secondary, tertiary, quaternary, etc.).

A series of organisms eating each other creates a flow of energy from one organism to the other, and this is what we call a food chain.

A food chain is a series of organisms feeding on each other, which creates a flow of energy from one organism to the other.

In the ecosystem there are many food chains, and one organism can be a food source for many other organisms.

Grass is eaten by worms, and worms are eaten by frogs, but also by hens. Hens also fed on grains, and both frogs and hens are eaten by eagles.

These interconnected food chains are called a food web.

In all these cases, grass was the main producer of energy for all the other organisms.

What is a trophic level?

Trophic levels refer to the different levels of a food chain.

We have a food chain consisting of grass, rabbits, snakes and eagles.

Grass being at the base of the food chain is always called the producer (plant or algae).

They are called producers because they are able to produce their own food (energy) through photosynthesis using the sunlight.

The base level is called ‘Trophic level one’ because this is the level where all the energy in the entire food chain is produced.

The second level is called ‘Trophic level two’, and this is the level where we find the primary consumers (the first consumers).

Here we find the first organisms in the food chain that consume other organisms.

These are also called herbivores because they only eat plants and algae.

The third trophic level is called ‘Trophic level three’, and consists of secondary consumers because they are the second level of consumers in the food chain.

Here we find carnivores because they eat other animals.

From this point onwards, the pattern keeps repeating with organisms in the ‘Trophic level four’, where we find tertiary consumers, which are larger carnivores. 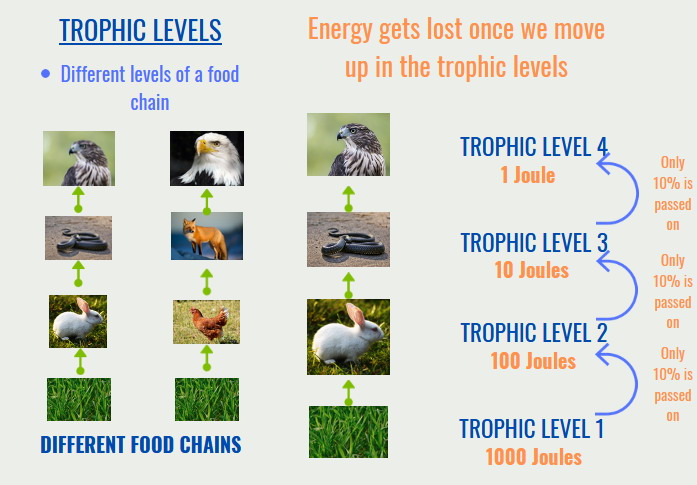 Different food chains in different ecosystems will have different numbers of trophic levels, but we usually don’t get more than four or five.

Once we go up a trophic level, some of the energy is lost and this is the reason why we have food chains or food webs where we don’t have enough energy to sustain organisms in much higher trophic levels.

What is the Pyramid of Biomass?

In the above image, where we presented trophic levels in different food chains or food webs, we’ve seen that only about 10% of the energy is transferred to the next trophic level.

For this reason, the amount of energy in each trophic level decreases once we move up.

Once we go up in the food chain, the mass of each trophic level decreases and this is the reason why we get the pyramid shape of the biomass.

Once we move up a trophic level in the pyramid of biomass, most of the biomass and energy is either lost or used (consumed), and this way only about 10% of it gets transferred up to the next level.

There are three main reasons why only 10% of the biomass is passed on.

Hawks don’t eat the skeleton or teeth of the snakes they consume.

2. Some of the parts that they do it may not be absorbed

This is happening because some body parts eaten might not be absorbed (scales).
The predator (in this case the hawk), can’t break down these body parts properly (scales), so they get egested as feces.

3. Most of the nutrients absorbed are used to release energy through respiration rather than for growth

This means that the biomass consumed gets released as waste products such as urea and carbon dioxide (CO2), instead of being stored within the organism of the consumer.

When the organism ends up being eaten by something, it doesn’t pass on all the biomass that is consumed throughout its life because the most of it is used for everyday functions.

How to calculate the efficiency of the biomass transfer?

This is the percentage of the biomass that’s passed on each time (from one trophic level to the other).

We use as an example, the following biomass pyramid composed of grass, rabbits, snakes and hawks.

To measure the efficiency of the biomass transfer between the first and the second trophic level we have the following equation:

This means that 9.66% of the grass biomass got passed on to the rabbits.

To measure the efficiency of the biomass transfer between the second and the third trophic level we have the following equation:

This means that 10.41% of the rabbits biomass got passed on to the snakes.

To measure the efficiency of the biomass transfer between the third and the fourth trophic level we have the following equation:

This means that 10.66% of the snakes biomass got passed on to the hawks.

Ecological pyramids are diagrams that are used to show the relationships between organisms in an ecosystem.

They are made up by stacking bars on top of one another, and are used to show the number of organisms or biomass of each trophic level in the ecosystem.

Trophic levels in an ecosystem and the energy flow from one level to the other can be graphically depicted like in the below image. 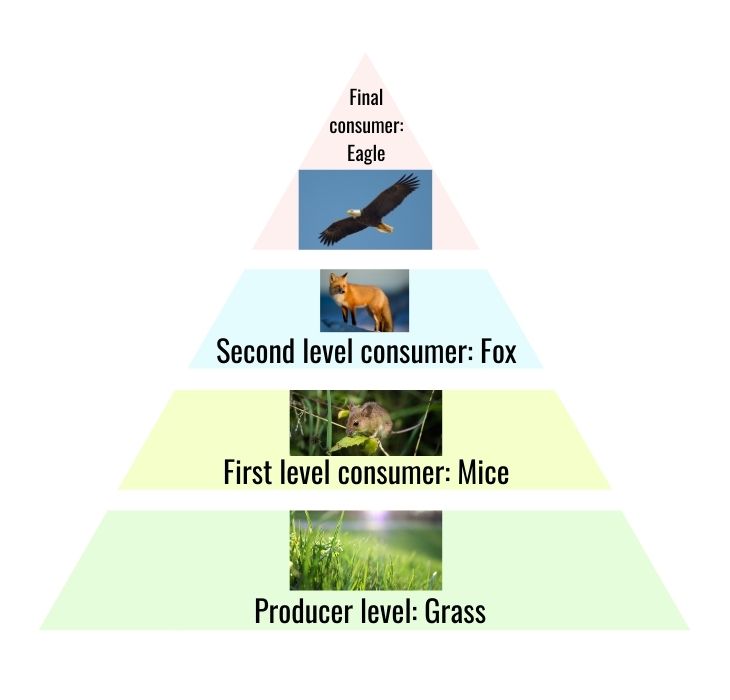 In the ecological pyramid, the base level is always occupied by the producer.

There are different types of ecological pyramids: pyramid of numbers, pyramid of biomass and pyramid of energy.

The pyramid of numbers shows the number of organisms at each trophic level and doesn’t take into consideration the size of the organisms present in that level.

It shows only the number of organisms, whether the organisms are big or small.

In the pyramid of numbers, each consecutive layer or level contains fewer organisms than the level below it. 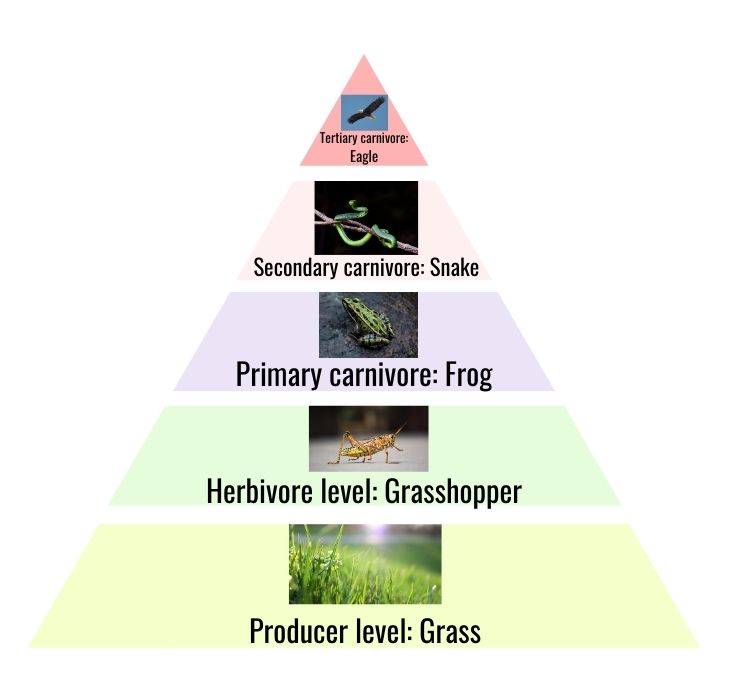 In the above image, we can see the pyramid of numbers of a food chain composed of grass, grasshoppers, frogs, snakes and eagles.

At the producer level (the first level of the pyramid), we have the largest number of organisms, which in this case is the grass.

The number of grasshoppers at herbivore level (the second level of the pyramid) is obviously smaller than the number of grass located at the producer level, so it sits above the first level.

The number of frogs at primary carnivore layer (the third level of the pyramid) is smaller than the number of grasshopper.

The number of snakes at secondary carnivore layer (the fourth level of the pyramid) is smaller than the number of frogs.

However, to summarize, we can mention that the pyramid of biomass focuses on the total mass of the organisms at each trophic level.

Let’s take the example of a biomass pyramid consisting of three trophic levels such as: plants, deer and lions.

Grass is at the base level because it produces its own energy using the sunlight, and a large mass of grass is required to feed a smaller mass of deer.

The mass of deer will then feed a smaller mass of lions, and this way we get the pyramid shape.

Inverted biomass pyramids are usually specific to ecosystems in the ocean. 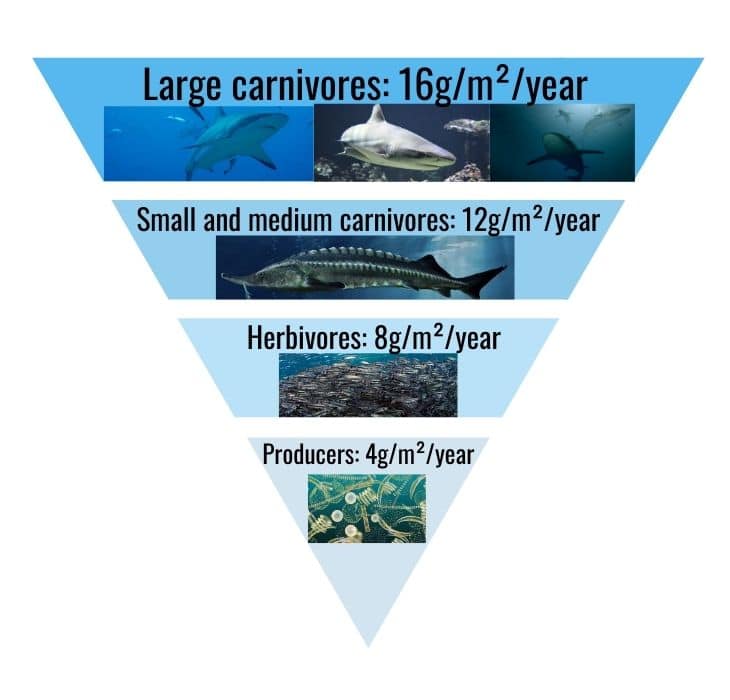 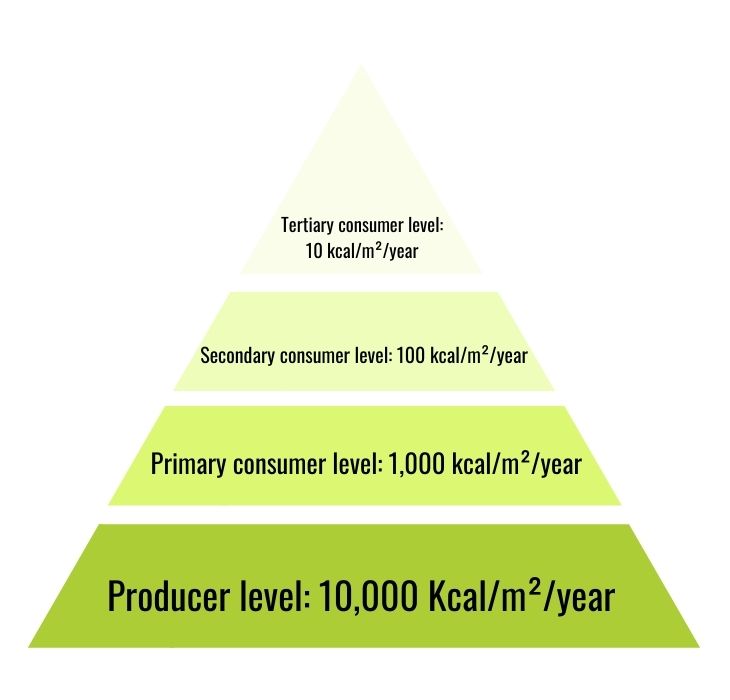 The energy pyramid shows that the energy transfer from one trophic level to the next is accompanied by a decrease due to waste and the conversion of potential energy into kinetic energy and heat.

As energy passes from the producer to the consumer and from there to another consumer, a lot of it is lost in the process, and this is the reason why the last trophic level in the food chain will receive much less energy.

The pyramid of energy is more used than the others because it shows a comparison between different trophic levels in the ecosystem.

Learning about the pyramid of biomass and about other ecological pyramids is very useful because this way we learn how ecosystems work on our planet, and this knowledge can help us create similar ecosystems on other planets. 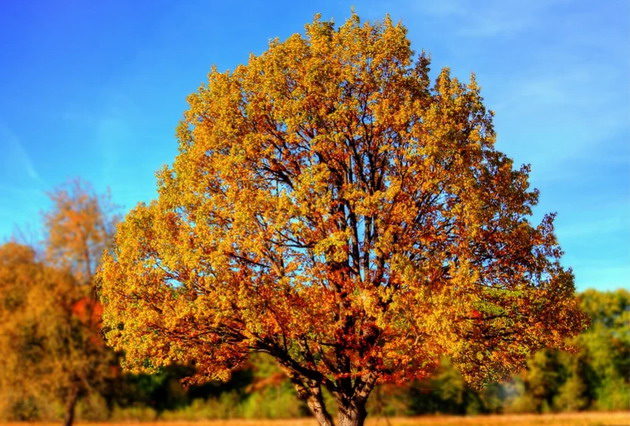 What is a Tree Survey? 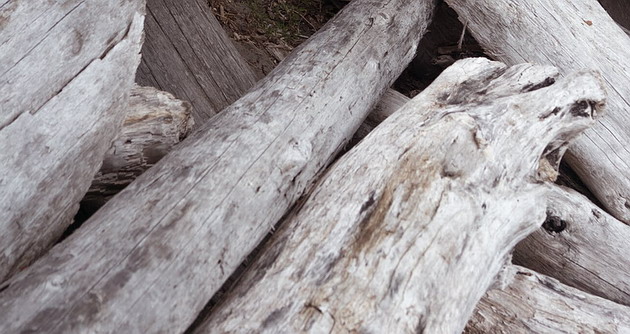 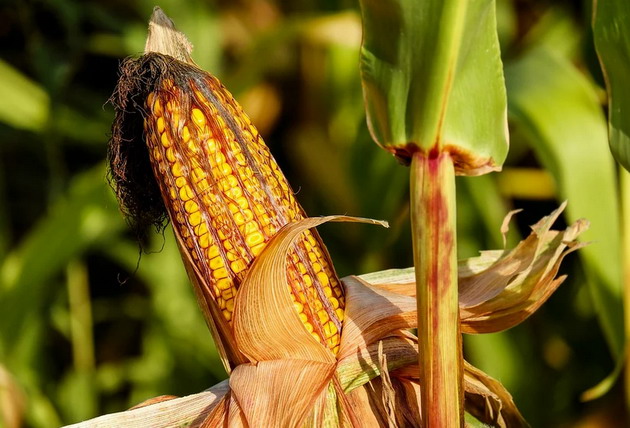